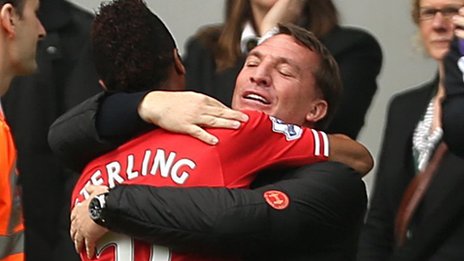 Liverpool managed to edge out Norwich city to go continue their winning streak to 11 matches in a row. The 3 points from the match takes them 5 points clear of second place Chelsea who lost on Saturday.

The two sides will meet the following Sunday at Anfield in what could be a title decider.

With a fast paced start that has served them so well this season, Liverpool went ahead 2-0 in the first 11 minutes with goals from Sterling and Suarez. But they allowed Norwich back in the game conceding a goal due to a poor save from keeper Mignolet.

Sterling restored the 2 goal advantage but relegation threatened Norwich pulled another goal back to ensure another nervy last 10 minutes for Liverpool.

The premier league leaders were playing without Jordan Hendersen (out suspended for two more games) and Daniel Sturridge who has scored lots of goals to help the Liverpool cause this season.

Manchester City in 3rd place, 9 points behind Liverpool have two games in hand on the leaders. They play one of them on Monday and cannot afford to drop any more points if they are going to stay in contention for the title.

Liverpool need 7 points from their last 3 matches to win the top flight title after a drought of 24 years.

« Up Next
R.I.P. Tito Vilanova